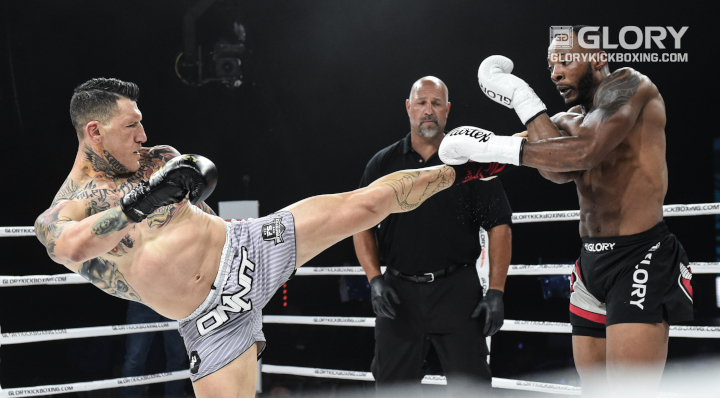 Rodriguez: “I’m not the underdog against Wilnis but it WILL be a dogfight!”

Jacob ‘One Time’ Rodriguez is heading into the challenge of a lifetime in his home city of Houston, Texas next month.
He’s taking on former Middleweight champion Jason ‘Psycho’ Wilnis in a Main Card showdown.
Wilnis is one of the most established fighters in the sport today, a consistent presence in the organization since GLORY 4 TOKYO. Rodriguez, 34, while older, is having just his second fight in GLORY.
“The attraction is big for me. I understand whats at stake, and I know what I’m going up against. It’s the biggest fight of my career and I’m excited to showcase my all of my fight abilities,” he says.
“There is no underdog here. I do however see it being a dogfight. I’ve visualized the fight and know what he is going to do in the ring. He’s gonna move forward with pressure and low kicks.
“He and I have very similar styles.  Aggression, constant ring control and a wicked pace. I’m not too worried about the power. Everyone has power in this division.
“The home soil and everyone being there is definitely adding more fuel to the fire. I want to put on a show for my city and my people.  And that exactly what I’m going to do.”
One thing hanging over Wilnis going into the bout is the fact that he’s riding a three-fight losing streak, a cut stoppage loss to Yousri Belgaroui sandwiched between two decision losses to Simon Marcus.
“Riding a losing streak isn’t good for any fighter’s morale. If that is something to take advantage of then sure, I’ll take it,” says Rodriguez.
“But he is still very dangerous and I’m looking at this fight as just that - dangerous.”
GLORY 63 HOUSTON takes place Friday, February 1 at the Arena Theater in downtown Houston, Texas.
The card features Featherweight champion Petchpanomrung and local phenom Bekah Irwin, who at just 18 years is the youngest fighter ever to sign with GLORY Kickboxing.