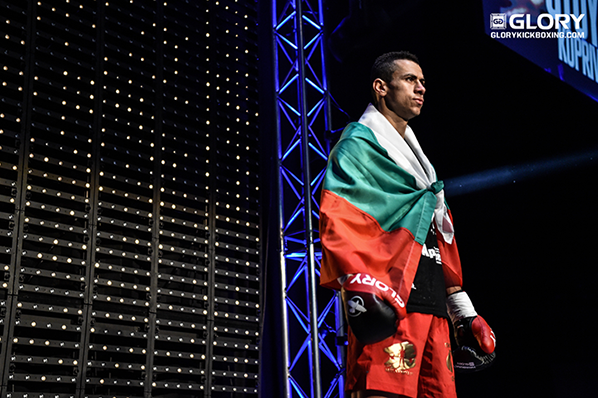 Stoyan: “I’ll be ready to explode and catch Jaraya at the right moment”

Stoyan ‘The Sniper’ Koprivlenski (10-3, 4 KO’s) will head to Paris, France next week for a showdown with Mohammed ‘The Destroyer’ Jaraya (64-7, 36 KO’s).
The GLORY 66 PARIS fight marks Jaraya’s return to Lightweight following an unfruitful foray into Welterweight for his two GLORY appearances to date.
Koprivlenski is the man who will be welcoming him to his new home in GLORY. He doesn’t plan on making the welcome a warm one.
“Jaraya is good fighter. He didn’t do very well at Welterweight so it’s a smart move to go back down to Lightweight. I expect a better fighter than we have seen in his previous two GLORY fights,” says the talented young Bulgarian.
“The key to this fight is who can impose his style. I am the taller fighter and I have more reach so I will use that to my advantage, to attack him from distance.
“One thing is for sure though - this will be an explosive fight. I’m planning to be a little lighter than before, in order to be faster. I’ll be ready to explode and catch him at the right moment. Attacking at that right moment, that’s what will bring me the win.”
In some ways, Jaraya’s large fanbase makes this encounter the biggest fight of Koprivlenski’s career so far. Jaraya has a name and a following; a win could be a breakout moment for ‘The Sniper’.
With Koprivlenski ranked #3 at Lightweight, if he does come away with victory in the French capital next week, does he plan on using it as a platform from which to call for a title shot?
“Let’s first do the hard work of preparing and then the fight itself,” he smiles. “Every fight is important for me. No one is an easy fight and no one is a walk in the park.”
GLORY 66 PARIS takes place Saturday, June 22 and is Headlined by world Welterweight champion Cedric Doumbé defending the Welterweight championship against the #1-ranked challenger Alim ‘The Professor’ Nabiyev.
In the co-main event, super-bantamweight champion Anissa Meksen defends her title against Sofia ‘The Wolf’ Olofsson of Sweden, while the Main Card also hosts light-Heavyweight contender Luis Tavares and rising Welterweight threat Hamicha.
GLORY 66 PARIS airs live in France on RMC 4 and in the Netherlands on VERONICA, while viewers in the USA and worldwide can watch live via UFC Fight Pass.